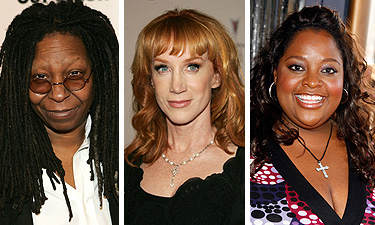 “Extra” has learned the race for Rosie O’Donnell’s seat on “The View” is getting heated – and a decision could come soon.

Sherri has made no secret out of her wish to take a permanent seat on the show. She told “Extra” after guest-hosting, “I would love that job!”

But if the race seems too close to call, “Extra” has learned there could be a surprising compromise: the three women could actually all be hired – and take turns filling the seat!

Today, Rosie spoke out about leaving “The View” and revealed there is no bad blood between her and her ex-hosts.

She wrote on her blog that she still keeps in touch with Barbara Walters, despite rumors to the contrary!

Rosie also opened up on how she feels about “The Price is Right” and its new host, Drew Carey.

She said she wishes Drew the best!

Rosie famously contended to host the show, but she backed out last month once it was revealed she would have to move to California.

“Extra” caught up with Drew in New York City today, where he revealed the price was almost not right for him.

“There was one thing we were negotiating that was kind of a deal-breaking thing,” Drew admitted.

Luckily, Drew and the producers behind “Price” were able to hammer out a decision – and it was just in time.

“I heard like 15 minutes into the Letterman show, like 5 minutes before I went on the air,” Drew revealed. “It was crazy!”

Who do you think would make the best host on "The View:" Whoopi, Kathy or Sherri?