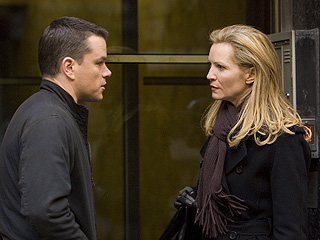 Ten years after he shot to fame in "Good Will Hunting," Matt Damon has countless movies and a star on the Hollywood Walk of Fame under his belt.

Through it all, Matt has kept several things constant: the love of his family, his trademark sense of humor and his friendship with longtime buddy Ben Affleck.

“Extra” was with Matt, 37, at the premiere of his action flick, “The Bourne Ultimatum,” where he met up with Ben and his wife Jennifer Garner and looked back on his successful career.

“I wish I could've had that when I was in college,” Matt laughed about the honor. “I would've had a little more success with the ladies.”

But right now the only woman in Matt’s life is his wife Luciana, who was with him when he received the star and at the “Bourne” premiere.

“I’m really blessed,” Matt said about his new life as father to baby Isabella. “I wouldn’t mind another kid or two and maybe down the line that will happen…it’s easy for the guy to say. I’ll see what I can talk my wife into!”

With Luciana and his mother by his side, Matt joked about his friendly rivalry with Hollywood’s other leading men, Ben and pal Brad Pitt.

“I am definitely more macho than those guys!” Matt insisted. “They can’t stop me. They’re taller than me, but I’m more macho. I pack more testosterone in my smaller frame.”

As to whether or not the rumors are true that producer J.J. Abrams is considering Matt for the part of Captain Kirk in his new “Star Trek” film, Matt admitted, “I actually called J.J. because I kept hearing these rumors, but he was like, ‘No, you’re way too old.’”