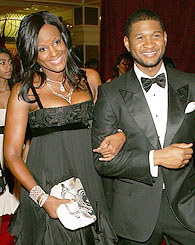 "Extra" has confirmed that Usher and his fiancée Tameka Foster will marry this weekend in the Hamptons!

Usher, 28, and Tameka, 38, just announced last month that they were expecting a baby together.

This is the first wedding for Usher and the second for Tameka, who already has three children.

The wedding this weekend is so hush-hush, guests were invited via telephone instead of mailing invitations!