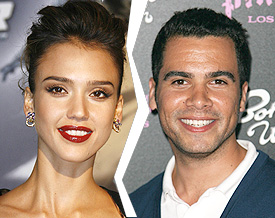 Men around the globe can now rejoice.

After two-and-a-half years together, Jessica Alba and Cash Warren have called it quits.

Us Magazine reports that the actress, 26, broke up with the 28-year-old producer last week over the phone while she was promoting “Fantastic Four: Rise of the Silver Surfer” overseas.

Sources tell Us Magazine that Jessica told Cash, “I’m not in love with you anymore,” and promptly sent an assistant to their L.A. home to pack up his belongings and move him out.

The breakup "happened...almost out of nowhere," sources tell the magazine. "[Cash] thinks it’s for another guy but doesn't know....he's totally devastated. But it was all her."