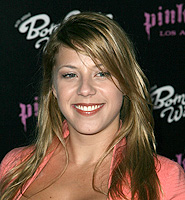 Sweetin, 25, married film set designer Cody Herpin, 30, last Saturday at the Little Church of the West on the Vegas strip. Reports say they met just a few weeks ago.

It’s the second marriage for Sweetin. She was previously married to a Los Angeles police officer, but their marriage fell apart when Sweetin admitted to an addiction to crystal methamphetamine. She has since reportedly been clean.