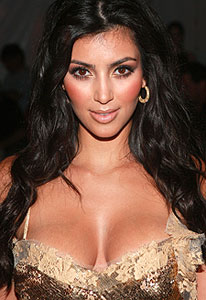 Hollywood socialite Kim Kardashian is about to become known for being something other than Paris Hilton's best friend.

She's going to strip down for an upcoming issue of "Playboy" magazine.

Kim, who once told "Extra" that "confidence is really sexy," is rumored to be dating NFL player Reggie Bush.

The two were spotted kissing earlier this month over lunch in Los Angeles, but for now, Kim is keeping mum.