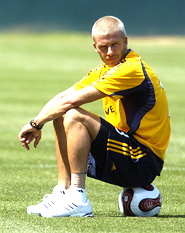 Only five million people tuned in to see Victoria Beckham juggle soccer practice in stiletto heels last week, but executives are hoping her soccer stud husband will pull it off.

"David Beckham's arrival is a tremendous milestone in U.S. soccer history," said a FOX rep. "The series will provide an insider's look at his performance with the Los Angeles Galaxy."

Airing next Wednesday, the show will focus on David as he plays with the L.A. Galaxy soccer team.

There are high hopes that David's series will turn out better than Victoria's. Her anticipated reality show, "Victoria Beckham: Coming to America" bombed in the ratings. It was beat out by a repeat of "Wife Swap."