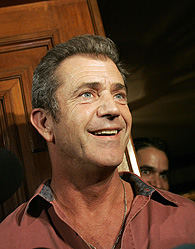 Mel Gibson, who caused massive controversy last summer when he went on an apparent Anti-Semitic rant after being pulled over for DUI, is raising eyebrows again after a night out in Costa Rica.

“Extra” spotted Mel in a bar there, where he just bought a house, surrounded by smiling fans in an image eerily similar to that notorious night at a bar in Malibu.

But it appears Mel is drinking only water – and he’s in Costa Rica for a charity mission.