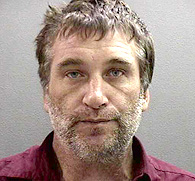 Daniel Baldwin is giving the world a glimpse of his deadly battle with addiction on ABC’s “Primetime,” offering the startling confession, “I’m a diehard coke-head.”

But before Daniel bared his soul to ABC’s Cynthia McFadden, he sat down with “Extra” to discuss the drug battle that nearly killed him.

Last fall, Daniel came to “Extra” along with his brother Stephen to go public for the very first time about his 18-year battle with drugs.

Daniel revealed he was scared straight after a speeding car crash and a prior arrest – leading him to become “born again,” like his brother Stephen.

“That was my wakeup call,” Daniel told us. “I actually called Stephen and said, ‘I’m ready.’”

Then, the former bad boy voluntarily checked into rehab – for the ninth time – with "Primetime’s" cameras rolling, at the Renaissance rehabilitation center in Malibu.

But when it comes to getting well, money doesn’t matter – and no one knows that better than Daniel’s mother Carol.

Today on “Good Morning America,” Carol, who is a cancer survivor, made this sad revelation: "Every time the phone rings after a certain hour at night, I pray that it’s not that Daniel is dead.”

Daniel is giving “Primetime” unprecedented access inside his 7-month long detox, and showing the world his chilling video diary from his battle to get clean.

“One month, I was up for 11 straight days without eating or drinking, except for water,” Daniel admitted.

He also talked about the terrifying night he almost died from his addiction.

“I did a really big hit as they call it,” he said. “And remember lying down and putting my head up and going, ‘God Almighty.’”

The full story of Daniel’s war with drugs airs Tuesday night on “Primetime.”