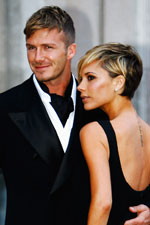 Victoria Beckham has only been in the U.S. for a few days, but she is already causing controversy in Hollywood!

In an interview with the LA Times, the fashion conscious Spice Girl said that Hollywood actresses are definitely not as “posh” as she is.

“They dress down quite a lot here, don't they?” Victoria said. “It seems to be in keeping to go to Starbucks in tracksuit bottoms and Ugg boots.”

“I have one pair of tracksuit bottoms for non-photographic opportunities only,” she added. “Underground car parks are fine, but aside from that, no.”

Victoria also said that unlike Hollywood stars, she prefers to mix up her wardrobe and style.

“I get quite bored with the way people look the same all the time, with the same makeup and the same outfit, and the same kind of hair,” she said. “I like to change things around quite a bit.”

Americans are about to get a lot more of Victoria when her special, “Victoria Beckham: Coming to America,” airs Monday night.