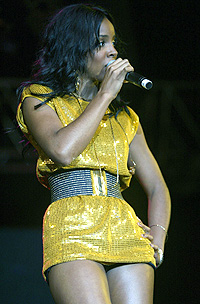 She was taken to an undisclosed hospital for a checkup, and her rep said that dehydration was the culprit.

She’s now reported to be “in good condition” and is expected to return to the U.S. today.

Rowland, 26, was in Nigeria as part of the ThisDay Music Festival, which also featured Shakira, Rihanna, UB40 and others.