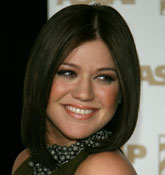 “Extra” has the furious first words from “American Idol” star and Grammy winner Kelly Clarkson about her simmering feud with record mogul and icon Clive Davis.

Kelly reputedly blew off Clive advice for her new CD titled "My December" --- and wrote all the songs herself.

Now, her summer tour is cancelled and Kelly is blasting Clive in the new issue of Blender magazine, saying she told the BMG/RCA honcho, “I get (that) you don’t like my album. You’re 80; you’re not supposed to like my album.”

But if Kelly is concerned, she didn’t show it when we spotted her at a trendy LA restaurant yesterday, where we collided with Paris Hilton.