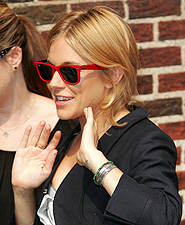 Since Sean “Diddy” Combs broke it off with his longtime girlfriend Kim Porter, reports have been circulating that Sienna Miller was behind the breakup.

But she’s telling “Extra” there is no truth at all behind those shocking rumors!

“The amount of people I've been linked to that I've said, ‘Hi, nice to meet you,’ at a party, and then next minute I'm pregnant with their child," Sienna blasted.

She admitted she has a new man – who is not Diddy – and said she and the rapper are just “good friends.”