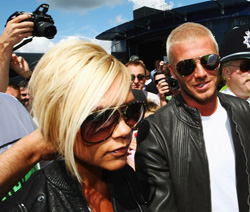 Locking lips, stripping down and lounging in bed!

Victoria revealed to “Extra” just how she got that tight body, explaining, "I’m always running around after my kids."

The sexy Spice Girl says playing soccer with superstar hubby David and their three boys keeps her in hard-body shape.

“They stand me in goal and all three of them just kick footballs at me, and David too,” she revealed.

W Magazine’s James Reginato said the Beckhams were game for pushing the envelope with famed photographer Steven Klein for their racy spread, shot on location in a rock quarry in Spain.

“We shot some pretty steamy scenes, but they were comfortable with everything,” James said.

The famous twosome is seen kissing and undressing each other in bed, with Victoria in sexy lingerie and David showing off that famous bare chest!

In the cover story, England’s most famous couple open up about their new $22 million Beverly Hills mansion and joke about how they won’t have any live-in staff because “they like to wander around naked.”

“There was a lot of PDA between Posh and Becks,” James said.

James said the Beckhams also talk about how David’s alleged affair with an assistant rocked their marriage three years ago: "They said it was a very difficult time for both of them, but their marriage is stronger than ever."

David said the tabloid headlines come with the territory.

“Unfortunately, that’s part of my life. That comes obviously with some of the success that I’ve had,” he admitted. “People try and knock you down and say things about you that aren’t true.”