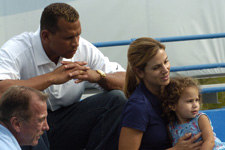 The stars were out at the All-Star Baseball Game in San Fransisco, and they came straight to “Extra!”

Nick Lachey is finally opening up about those scandalous naked pictures of him and girlfriend Vanessa Minnillo, which were snapped while the two were on a private vacation in Mexico.

The fallout from those photos – which were splashed all over the internet – is an experience Nick won’t soon forget.

“It’s frustrating,” Nick said. “You want to keep some things private, and it’s not always doable.”

Nick is used to invasion of privacy – his life with ex-wife Jessica Simpson was documented step-by-step on their MTV show “Newlyweds” – but it’s something relatively new for Vanessa.

“You fight to see another day,” Nick said about helping Vanessa through it. “Live your life. You can’t let other people dictate your life to you.”

“Extra” also put Dane Cook in the hot seat after pictures of him and Nick’s ex Jessica surfaced, reigniting rumors of a possible relationship.

“It’s superfluous,” he insisted. “It’s part of the rigmarole.”

Meanwhile, Yankees star Alex Rodriguez came to “Extra” to face the rumors about an extramarital affair.

Sitting close to wife Cynthia, he said he tries to stay focused on what’s really important, and not on pictures from the New York Post of him alongside a mystery blonde!

“It starts with enjoying the game, knowing that I'm in a good place right now,” he said. “The key for us is for me to keep doing what I'm doing, but do it with more victories for the Yankees.”

Gavin Rossdale Admits He Never Wanted to Split with Gwen Stefani: 'I… 4