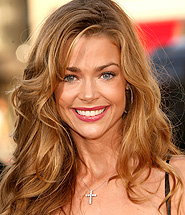 Denise Richards, the ex-wife of Charlie Sheen and mother of his two children, is congratulating Charlie and girlfriend Brooke Mueller on their engagement!

"I am genuinely happy for the two of them," Denise tells People. “In fact, I sent them flowers to congratulate them both. I've spent time with her, and my girls really like her. That's all that matters to me."

Charlie, 41, and Brooke, a 29-year-old real estate investor, have been dating for more than a year. Us Weekly first broke the news yesterday that the couple decided to get hitched while vacationing in Costa Rica, when Charlie sealed the deal with a $500,000 ring!

He and Denise split in 2005 in what appeared to be a bitter breakup, as Denise filed for divorce while she was pregnant with their second child. They have two daughters together, Sam, 3, and Lola, 2.

The two have since been friendly, and Denise was even spotted shopping with Brooke earlier this week!

Denise, 36, recently split with Richie Sambora after more than a year together, but she’s shooting down reports the breakup came because Richie, 48, wouldn’t propose.

“That is 100 percent completely false," she tells People. "There were a lot of rumors about our relationship from day one and we broke up for many reasons. Richie is a great guy and an amazing father. I really wish him well."