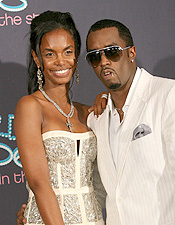 Kim has moved out of the apartment they shared in NYC and into a new home in Beverly Hills -- and she took all of their kids with her.

The couple has been together since the 1990s, and they have several children together: son Christian, 9, and twins D’Lila Star and Jessie James, 7 months. Kim also has a teenage son, Quincy, with singer Al B. Sure, and Diddy has a son Justin, 13, with stylist Misa Hylton-Brim.

Now there are scandalous reports that Diddy and Kim broke up because he got involved with Sienna Miller!

But Diddy’s rep insisted, “There is literally nothing between them,” though they’ve been spotted partying together in recent months.