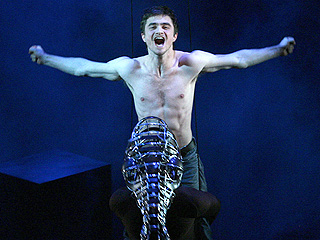 Harry Potter is all grown up!

The new movie is in theaters this week, and 17-year-old star Daniel Radcliffe is on a magical adventure of his own.

The Los Angeles premiere of “Harry Potter and the Order of the Phoenix” marked Daniel’s first trip to Hollywood – and the enchanting experience left him and fellow co-stars Emma Watson and Rupert Grint awestruck!

“It was amazing because I don’t think me, Rupert and Emma realized what a big deal it was until we got out there,” said a starry-eyed Daniel. “And you suddenly looked at all the other names and it was, like, Douglas Fairbanks and John Wayne!”

Daniel and the young stars joined the ranks of Hollywood’s elite when they immortalized their prints in the Hollywood Walk of Fame, and the whole experience represents a coming of age for the young actor.

He’s featured in the new issue of Details Magazine, looking scantily-clad and very grown up!

“On my jacket they had the caption, ‘The Ultimate Sexual Fantasy,’ which doesn’t relate to me at all – but I’m going to take it!” said Daniel.

The captivating actor is definitely not the same baby-faced kid he was when the first “Harry Potter” movie hit the screen six years ago – he recently caused a sensation when he appeared nude on stage in the British production of Equus!

But Daniel isn’t surprised by the scandal that it caused.

“I was sort of amazed by it, but I wasn’t surprised,” reveals Daniel. “I knew it would happen, but even when it did I was going, ‘Come on guys, there’s more to the play than just that scene!’”

You can catch Daniel – fully clothed – when “Harry Potter and the Order of the Phoenix” opens Wednesday.