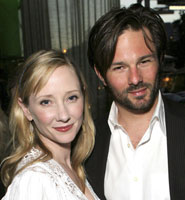 "Extra" has obtained court papers in which Anne's estranged husband claims that his ex-wife took furniture out of their house without asking, including "the bed he sleeps in."

Coley also told the court that the "Men in Trees" star "had gone into his closet and ripped the buttons off of 19 of his shirts and removed some of his pants."

But Anne is fighting back, saying, "I purchased all of the items that I moved from [the community residence] before my marriage."

Coley, 33, filed for divorce from Anne in February after six years of marriage, setting off a bitter war of words and custody dispute over their son Homer, 5.

Coley has called Anne "bizarre and delusional," while she has accused him of making outrageous financial demands.

Right now, their son Homer will stay with Coley while Anne shoots her ABC sitcom "Men in Trees" in Canada.