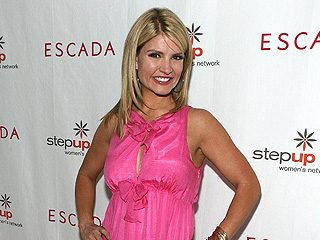 “Extra’s” own Dayna Devon is branching out into movies!

She just scored a role in the gritty western “Avenging Angel” with hottie Kevin Sorbo – and she’s showing us it all starts in wardrobe.

But unfortunately for Dayna, there wasn’t much wardrobe to begin with! All she got for her role as a saloon girl were bloomers, a camisole and a corset.

“I look like Raggedy Ann,” Dayna cried to us.

Next, she was whisked to hair and makeup, where Dayna asked, “What have I gotten myself in to?”

Dayna said her corset was tight, and her hair was “as high as Marge Simpson.”

“It’s the hair,” Kevin said to a frowning Dayna.

Then, Kevin gave Dayna some tips on how to perfect her Western drawl.

“You just have to say ‘young ’n’ and ‘ya’ll,’” said Kevin. “Those are really important words in Westerns so if you got those down you’re golden.”

As the stuntmen tried to show her, Dayna also had to know how to throw a punch and break a bottle over someone’s head!

“Now I’m ready to shoot my big scene,” said a rough-and-ready Dayna as she headed off to the set.