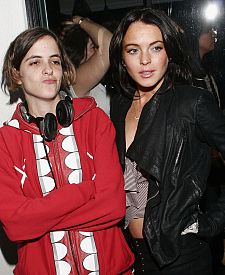 In an atmosphere strikingly different than her usual Hollywood hotspots, Lindsay Lohan celebrated her 21st birthday with friends and family on the beach in Malibu.

It was a far cry from the Las Vegas blowout that was reportedly sponsored by a Vodka company, and now friends and family are hoping the hard-partying starlet is turning her life around after rehab.

The low-key party was held at a small beachside home in Malibu late Monday afternoon, where guests munched on snacks and chatted with friends by the barbeque.

Lindsay’s mom Dina strolled through the sand with sister Ali, 13, and brother Dakota, 11.

But Lindsay’s fun was mostly confined to inside the house.

A group of photographers camped out on the beach, snapping pictures of Lindsay in her itsy-bitsy bikini. TMZ.com says the photogs arrived in the afternoon – and stayed until the wee hours of the morning, when the party was over!

Lindsay is still in rehab following her scandalous DUI citation and car crash in Beverly Hills. She’ll complete an extended-care program at Promises in Malibu, where she checked in last month.

What do you think? Is Lindsay on the mend? Post your comments here!