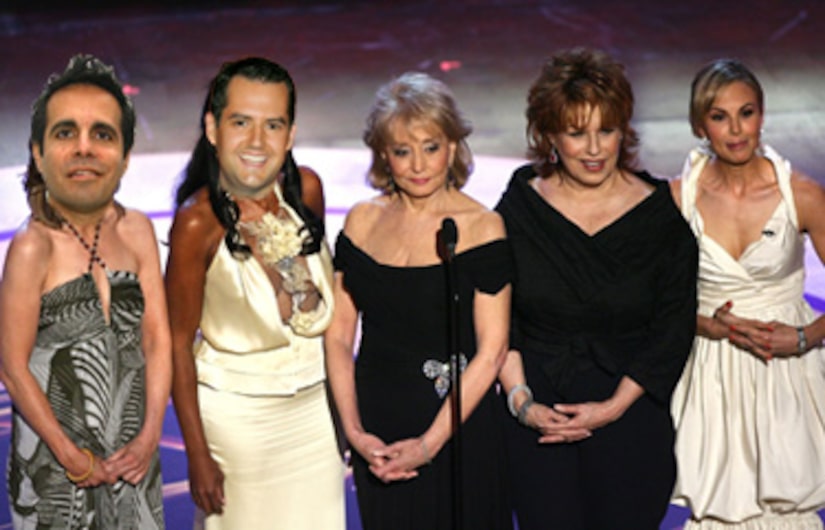 Is the next co-host of "The View" going to be a man?

Cantone, who played Charlotte's friend Anthony on “Sex and the City,” is a frequent guest on the show.

You may know Matthews as “Ross the Intern” from “The Tonight Show” with Jay Leno.

Both of them are going to be guest co-hosts next month, with Cantone appearing July 12 and Matthews on July 17.

“Barbara's really fond of Mario,” an insider tells people. “So who knows?”

But Rosie was a big fan of Ross the Intern. Together, they've co-hosted video segments on each other's blogs, and she even gave him her blessing to take over.

“I hope that they give me someone who's smart and fun and another real beauty!” jokes co-host Joy Behar.

Right now, a “View” spokesperson isn't making any promises, saying, "No offer has been made to anyone at this point.”

One thing's for sure – “Evan Almighty” comedienne Wanda Sykes is shooting down the rumor that she wants the gig.

“Right after I shoot myself in the head,” Wanda says plainly. Yikes!

Apparently, Wanda's “View” experience is one she never wants to relive.

“I co-hosted once, almost like a year ago,” explains Wanda, “and I can still hear them in my head. I wake up in the middle of the night, 'Can I just say something?'”

Meanwhile “Extra” can confirm Rosie will be making a return to “The View” this summer…in reruns, that is.

We asked if the show plans to re-run Rosie's famous on-air feuds, but a spokesman for the show shot back, “Feuds? It is unlikely.”

What do you think of a man co-hosting the show? Post your comments here!