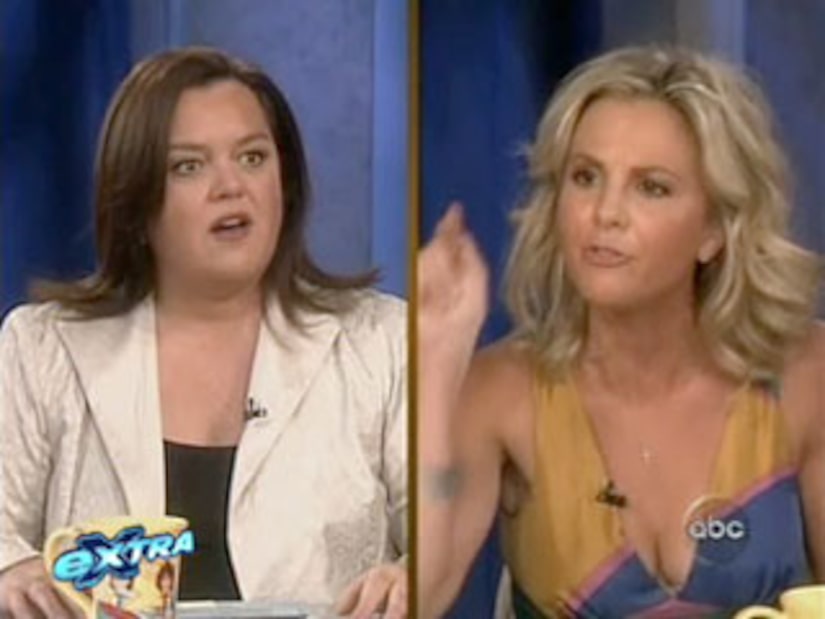 A major fight erupted at “The View” Wednesday morning, and this time, things got personal.

Rosie O'Donnell and Elisabeth Hasselbeck began screaming at each other, out-shadowing the other hosts. It got so heated that at one point, Joy Behar asked, “Who is directing this show? Commercial!”

It all began when the topic turned to Iraq – a major issue for liberal Rosie and conservative Elisabeth.

Rosie was furious because she believes Elisabeth didn't defend her over suggestions that Rosie had called U.S. troops "terrorists" during a previous debate - and Rosie called her a coward!

“I asked you if you believed what the Republican pundits were saying, and you said nothing! And that's cowardly,” Rosie said.

Elisabeth fought back, saying, “Do not call me a coward!”

The screamfest left fellow hosts with mouths open as they pleaded with Rosie and Elisabeth to calm down.

Elisabeth insisted, “I don't understand why it's my fault if people spin words that you put out there…. Defend your own insinuations!”

Rosie shot back, “Right, but every time I defend them, it's 'poor little Elisabeth' that I'm picking on.”

Then, Elisabeth threw a verbal punch in there – by bringing up Donald Trump.

“It's much easier to fight someone like Donald Trump, isn't it? Because he's obnoxious,” Elisabeth shouted.

It looks like Rosie, who leaves “The View” in three weeks, won't be saying goodbye without a fight!

But can their friendship survive this heated fight? And will their kids continue to play together?

Elisabeth told us, “I hope so. I think they will. We've actually been able to foster a great friendship this year, and it's so unexpected.”