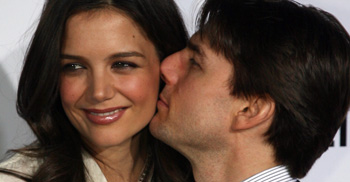 A woman outside Tom and Katie's Beverly Hills mansion was taken into police custody Thursday.

Somebody inside TomKat's estate tipped off police about Emily Leatherman. The woman is now in jail, arrested for receiving stolen property and violating a court order.

"Extra" has uncovered that this is not Tom and Katie's first brush with this woman. In August 2005, Cruise got a restraining order against her.

Ashley Tisdale and Christopher French Are Married! See Her Wedding… 8