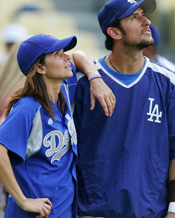 “Both babies are healthy,” announced Josh Rawitch, a spokesman for the Dodgers team.

She met Garciaparra at a 1998 charity event and wed in Santa Barbara in 2003. They currently reside in Los Angeles.

“Extra” sends our congrats to the superstar family!