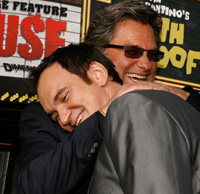 It was a boys’ night out in Hollywood Monday for Kurt Russell and Josh Brolin as they hit the red carpet for the premiere of their new movie, “The Grindhouse.”

The movie also features a star making turn for “6 Feet Under” and “Bobby” alum Freddie Rodriguez in his first action hero role.

“I think it opens doors, it shows people that I could be a guy like this,” Rodriguez told “Extra.”

Greed, Poison, and More! Watch the Exclusive Trailer for ‘The Devil Has a…

Nikki & Brie Bella Reveal Sons’ Unique Names, Plus What Is… 9