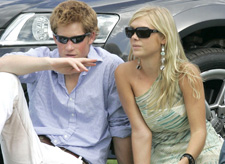 Did Prince Harry get into a scuffle outside a London nightclub over the weekend?

While multiple witnesses say yes, the royal family denies there was anything wild about Harry.

However, “Extra” can confirm that the Prince was partying with a mystery woman, raising eyebrows since Harry is normally seen with his longtime girlfriend Chelsy Davy.

Several insiders linked Harry to his beautiful brunette date for the night, who is a London TV personality.

But don’t worry, Chelsy; both insist they are just friends.