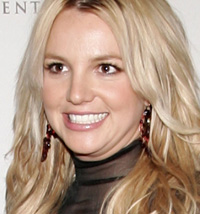 Even church couldn’t provide sanctuary for Britney Spears over the weekend.

A man apparently pulled a gun and then handcuffed a man at the church where the pop princess went to pray.

Just hours later, it was another scare for Brit, as she was rushed to an L.A. hospital to get treatment for a broken tooth!

“Extra” was there for Federline’s bash, where he told us, “Anything goes in Vegas! Who knows what’s going to happen!”

Only we got Kevin one on one at his 29th birthday after celebrating with his kids.

He partied at Pure nightclub with his ex, Shar Jackson, the Pussycats Dolls and his mom and dad.

“It’s exciting, I’m going to go in here and have a good time with my family and friends,” Kevin dished.