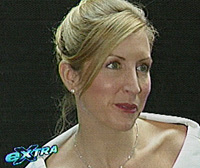 ‘N Syncer Joey Fatone may have emerged as the early “Dancing” favorite last week, but as the eliminations begin, “Extra” knows one thing for sure: Heather Mills is ready to get her Monday night mamba on!

We caught up with Heather and her dancer partner, Jonathan Roberts, as they rehearsed for Monday’s big show.

“I’d be so happy if I wasn’t the first voted out,” Mills admitted.

Before showing off her mamba moves that have helped her gain five pounds of muscle, Heather dished about her handsome dance partner.

Mills and Jonathan sure looked like a couple this weekend as they stepped out together at the Starlight Starbright Children Foundation’s charity auction.

But is there a chance she has a little secret crush on her sexy teacher?

“No, I don’t, to be honest,” Mills confessed, revealing that she requested a gay dance partner to prevent the British tabloids from making up romance rumors about her.

“If someone’s married, then, boom, it doesn’t even go in my head. But he’s just a great person,” Heather continued.

In the middle of her divorce from Sir Paul McCartney, Heather said she’s not looking for love.

“I’m not closed to going on a date one day, but I just haven’t got time at the moment,” she told “Extra.”

While romance will have to wait, catch Heather and the rest of the “Dancing Stars” sizzle, Monday night on ABC!

Cardi B on Why She's Divorcing Offset, Says: 'I'm Not Hurt' 8

Robert De Niro’s Harsh Words for the Current Administration, Plus:… 10