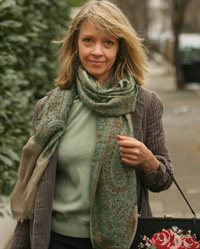 It’s Sir Paul McCartney snapped out on a date in London!

Sabrina dated Prince Charles before he met Diana back in the 70s, and she’s been linked to a host of famous men including Mick Jagger, Jack Nicholson, Michael Douglas and Rod Stewart.

The buzz is that Sir Paul and Sabrina have gotten close in recent weeks; however, the Beatle icon told the photogs who spotted them out together, “It’s not really a big thing. We’ve known each other for a long time.”