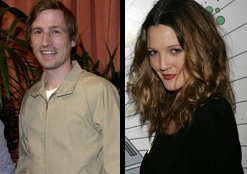 "Extra" is kissing and telling about Hollywood's newest spring couples.

We spotted Drew Barrymore in a lip lock with a new man recently in Santa Monica.

So who is the lucky lad? "Extra" has learned it is none other than esteemed movie and music video director, Spike Jones.

While she may have recently been linked to Justin Timberlake and Derek Jeter, beautiful Biel has been spotted having intimidate dinners with Ryan Reynolds, Alanis Morissette's ex-fiancé.