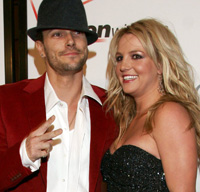 Britney, hold onto your wallet, because rumors are running rampant that Kevin Federline is set to receive $19 million in his divorce settlement.

As this scuttlebutt catches on fire, “Extra” has learned that K-Fed visited his ex with their kids the day she left Malibu’s Promises rehab center.

However, despite the claims, TMZ.com reports there is no way Kevin will get a $19 million payday; rather, the estimated lump payoff will be less than $2 million thanks to Britney’s airtight pre-nup.

“Extra” has also been told the pop diva won a British court injunction Thursday that will prevent publication of stories about her stint in rehab.

Spears’ London based law firm told the press that the injunction barred unidentified spies “who has/have been leaking information about Ms. Spears' time in a rehabilitation clinic from further disclosures invading her privacy."

The firm also revealed that Brit planned to ask the court to force media outlets that had printed stories about her time in rehab to reveal their sources so that the source of the leak could be identified "and action can be taken against him/her."

Click on an image to view the Britney Spears photo gallery!