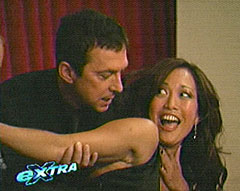 Strap on your dance shoes and get out on the floor because TV’s two-stepping powerhouse is back on ABC, and nothing painted that picture better Heather Mills, as she faced dozens of photographers when she checked into her Los Angeles hotel.

While Heather's brave attempt to dance with a prosthetic leg is one of Monday night's top storylines, everyone has their eyes on who may be dancing just a little bit too close!

“Dancing with the Stars” has a history of contestant hookups, and now two-time champ Cheryl Burk is opening up to “Extra” about boyfriend Matthew Lawrence, the younger brother of former contestant Joey Lawrence.

But unlike his brother, don’t expect Matthew to hit the dance floor. “Actually, that’s his greatest fear is actually dancing in front of people,” Cheryl admitted.

The judges, however, are more worried about the contestants’ moves.

Only “Extra” was backstage with Len, Bruno and Carrie Ann Inaba for their season launching ABC photo shoot.

“We're really having a laugh,” Bruno admitted. “You should see us backstage, the things we do. Maybe you shouldn't. You may not be ready for that.”

“This year we have an amazing opening,” the judges added. “The audience will be screaming, completely different.”

And as if all tonight's tangoing weren't enough, the worldwide debut of the trailer for “Pirates of the Caribbean: At World's End” will air during the show.

That's one heck of a packed show, all Monday night on ABC.

Ryan Seacrest Returns to ‘Live! With Kelly and Ryan’ — How’s… 3