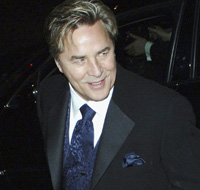 Say it isn’t so – did Mr. Miami Vice pass on his chance to show off his happy feet?

Yes! Don didn’t dance around the question on London’s Heart FM radio show, saying, “I turned down ‘Dancing with the Stars.’ But I have no regrets over saying no to that.’”

No word yet on who replaced Don, but season four of the hit show premieres Monday on ABC..