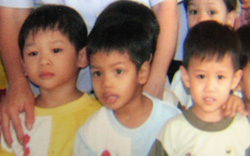 It was business as usual for Brad Pitt in Hollywood Thursday as Angelina picked up their new son.

Meanwhile, in Vietnam, Angie vowed she will now be a stay-at-home mom to help her new adopted son, Pax, adjust to his new life.

“I have four children, and caring for them is the most important thing for me at this moment,” Jolie said.

“Extra” also has new details on Angie and Pax’s emotional first meeting inside the orphanage with Maddox.

We’ve learned that Pax was not told he was about to be adopted, and he cried when he first met Angelina.

Later, Pax cheered up and played with his new brother, Maddox.

Pax and mom could be back in the states as early as this weekend.