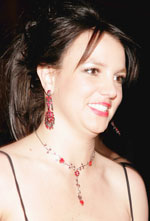 In a bombshell new report out Wednesday, rumors are swirling that pop princess Britney Spears is dating 33-year-old musician Jason Filyaw after the two met at an AA meeting.

“Extra” has learned that since their initial meet and greet, Brit and Jason have been in nonstop contact.

The reports also claim Brit’s family is worried that the rehab romance could destroy any chance for reconciliation with Kevin Federline, who we’ve learned visited Spears in rehab again Tuesday afternoon with their two boys, Sean Preston and Jayden James.

“Extra” will keep you posted on the latest in Britney’s rehab love connection!