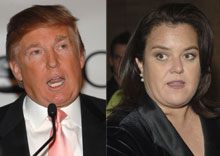 “Extra” spoke to Donald Trump who is targeting Rosie O’Donnell once again.

About O’Donnell’s recent admission that she battles depression, he declared, “All she has to do is look in the mirror and she’s going to suffer from depression.”

Trump also took aim at O’Donnell’s inversion therapy and said, “As far as her inversion therapy, I don’t think it works and I can think of no sight that I’d rather less see than Rosie hanging by her feet.”

“I know Britney. She’s performed for me and she was always so nice. She was like the queen five years ago… it’s very sad to see what’s happening. But in this world, anybody can make a comeback and hopefully somebody’s going to give Britney a second chance. She needs it," Trump said. “Somebody has to rein Britney in… she’s going to be fine…. she really needs help and she needs help fast before it goes too far.”

Trump will crown a new Miss USA next week and about the current Miss USA, Tara Conner, he said, “I saw her the other night, she looks great! She’s gone 90 days, no drugs, no alcohol."