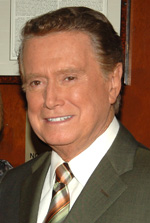 After returning from vacation on Monday’s “Live with Regis and Kelly,” legendary television personality Regis Philbin rocked daytime TV with a startling announcement.

“For a couple of weeks I have been feeling chest pains and shortness of breath,” Regis admitted to the world, before revealing he will undergo bypass surgery this week.

Although Philbin had angioplasty in 1993, he admitted this time there’s too much blockage.

On Monday, the ladies of “The View” sent Reege their best wishes.

“We love you Reege, you’re going to be okay, buddy,” Rosie O’Donnell said. “You’ve got good karma coming at you.”

And “Extra” caught up with Reege’s good friend Donald Trump on Monday, who said he’s confidant his pal will be just fine.

“Regis called me this morning before the show and told me about his little problem. All I said was I’ve known other people with it and they’re all 100%,” Trump admitted.

Of Philbin, Trump also touted, “Regis is the toughest guy you’ll ever meet. I mean, he’s the nicest guy! He will be 100% fine.”

We’ve also learned Regis has reached out to late-night host David Letterman for support, who had bypass 7 years ago and missed 5 weeks of works.

“Had a nice chat with Dave, and he highly, highly recommends it,” Philbin revealed, joking, “He’d like to do it again, I think!”

Here’s to wishing our friend a speedy recovery!