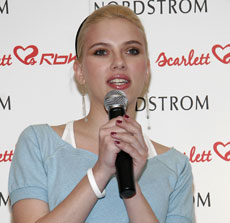 Sexy Scarlett Johansson has a secret confession: she thinks she looks like a boy!

The star of the upcoming “The Nannies Diaries” made this startling new revelation to Parade Magazine.

But Thursday night, Scarlett put those thoughts aside as she showed off her casual side while in Los Angeles.

The actress, who recently teamed with Reebok to create a new line of 80’s inspired sportswear, launched the Scarlett “Hearts” RBK brand at an L.A. Nordstrom’s.

“It reflects my own personal style in a sense because it’s my own creation,” Scarlett dished.

Through Reebok, “Extra’s” also learned Scarlett is giving away 2,000 pairs of sneakers to the charity “Soles 4 Souls.”

Win It! An Amethyst Skincare Set 4

So Naughty! Kendall Jenner Strips Down to Lingerie, Gets Spanked by… 9

'This Is Crazy': Vanilla Ice Among Passengers Quarantined After…