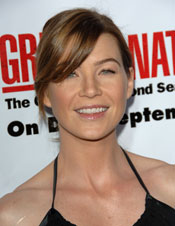 Ellen Pompeo of “Grey’s Anatomy” just got her prescription filled.

The dose? A new salary reportedly near $200,000 per episode, while her fellow cast members including SAG winner Chandra Wilson, James T. Pickens, Justin Chambers and T.R. Knight all reportedly received hikes of close to $125,000 per steamy, drama-filled episode.

As of Friday, there’s no McDreamy deal for Patrick Dempsey, Sandra Oh or Katherine Heigl.

What’s more, we’ve learned same goes for Kate Walsh, who is waiting to see if she’ll get a spin-off of her own.

But one “Grey’s” doctor is in a class by himself: Isaiah Washington.

“Extra’s” told his poor choice of words on the set and the Golden Globes could cost him; he may even have to report for his daily hospital rounds without a raise.

See how the drama unfolds every Thursday on ABC.