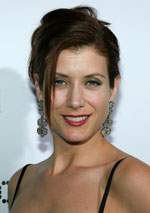 In a recent interview for the April issue of Best Life magazine, Walsh admits, “Sometimes I feel like, `What am I doing? Am I becoming my character, or is my character becoming me?’ I'm starting to get a little superstitious here. I definitely identify with my character in that, romantically at east, this is not where I thought I'd be at 39."

Before scoring her breakout role on “Grey’s Anatomy,” Walsh appeared on “The Drew Carey Show” and the series “The Fugitive.”

As for her exploding success, Kate confessed, "I feel torn between having the time of my life and wanting very serious things, like a surplus of love for a family and all that. But what's in front of me right now is work.

“Often, I think it would have been so great if this success had happened when I was 27 or 28, but then again, I wouldn't have had the maturity then to deal with it and not end up in rehab," she dished.

And while the dark-haired beauty revealed the boundaries between her real-life and on-screen role tend to blur, she doesn’t feel all too comfortable about it:

“With an hour-long drama, you start playing a little closer to who you are, because the writers hear you and are around you and they start writing for you," she said of Addison’s growing complexities on the show.

Tune into ABC for an all-new “Grey’s Anatomy” Thursday night.