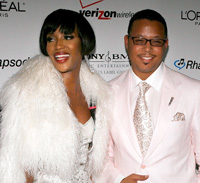 After numerous reports linked him to supermodel Naomi Campbell, Terrence Howard is speaking out and denying any love connection with the notorious beauty.

The budding romance was first reported by The New York Daily News, but Howard, star of the upcoming biopic “Pride,” is speaking out to People magazine and urging fans not to believe the rumors.

Rather, the one-time Oscar nominee revealed he’s currently trying to win back his estranged wife, Lori.

“You’ve got to remember that I’m still married,” Howard dished to the mag. “She filed for divorce, but I’m still trying to campaign. My kids are campaigning, too. They’ll make sure that anybody who comes sniffing around gets a bloody nose.”

Terrence and Lori divorced in 1999 after 10 years of marriage. They attempted reconciliation in 2005 but soon separated.

So how did the Naomi romance rumors ignite?

Howard revealed his only connection to Naomi is mutual friend, Quincy Jones. Instead, the actor said he’s known Campbell for about two weeks.

Click on an image to see the Naomi Campbell photo gallery!