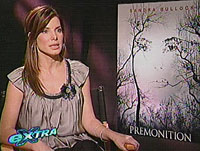 In her latest flick, “Premonition,” Sandra Bullock plays a wife who dreams of her husband’s death before it happens, and when Sandra sat down with “Extra’s” Dayna Devon, the starlet opened up about her own premonitions about the man she would later marry, Jesse James.

About thinking that James was a homophobic, chauvinistic and a bigot, Bullock said, “I had assumed that he was that. This was before I met him… which made me really sad in myself given that I considered myself very open minded.”

In regard to being open minded, Bullock finds that she has to be about James’ need for speed.

“I knew what I was getting into, within three months of our relationship, he wrecked a car at 120 mph and almost died,” Bullock revealed.

Sandra has taken necessary steps to help her understand what drives Jesse.

“There’s always going to be hospital stays,” she said. “Like twice a year at least, and I know that. I have all the information for insurance always close by in a wallet or in a purse.”

See all this and more as “Extra” goes one on one with the beautiful Sandra Bullock!