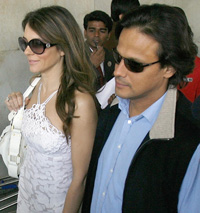 “Extra” was there as Elizabeth Hurley donned wedding white and said “I do” to her new husband, Indian millionaire businessman Arun Nayar, in a top-secret ceremony in England on Saturday.

The newlyweds were then besieged by the media as they arrived in India on Monday, where they will continue their six day wedding celebration, which will include a ceremony in the ultra-lavish Umaid Bhavan Palace.

Hurley, who has a 4-year-old son (with producer Steve Bing), recently told “Extra” about enlarging her family with Arun.

“Arun would love another baby,” she admitted. “We might have another one.”

But before the traditional Indian festivities begin, we’ve got the dish on the top-secret vows that took place at the 15th century Sudeley Castle in the English countryside.

Sir Elton John gave the blushing bride away, while Kate Moss, Elle McPherson and Hurley’s famous ex, Hugh Grant, were also on hand to send their well wishes to the newlyweds!