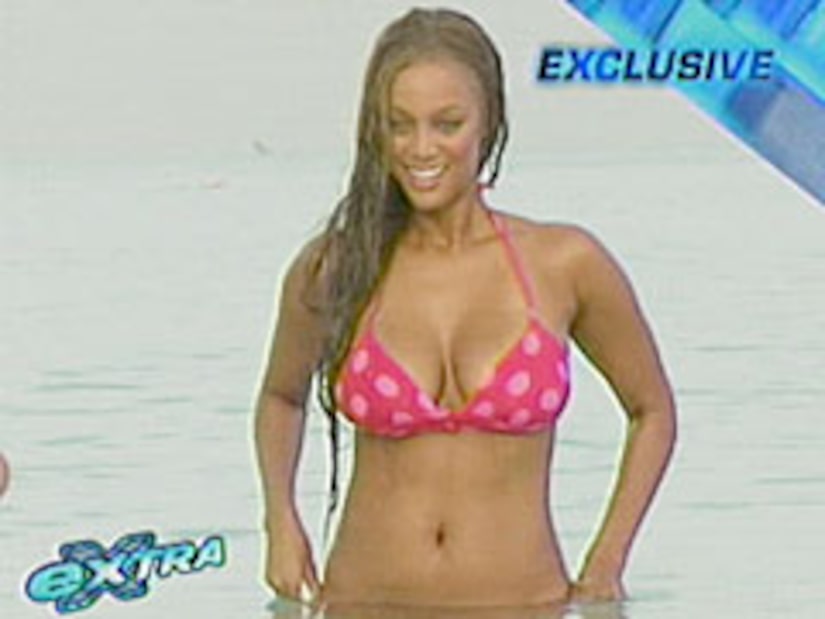 It was a photo flashback for the still fierce and fabulous Tyra Banks!

Only “Extra” was in the Bahamas with the bathing beauty as she recreated cover girl history at the luxurious Atlantis resort.

Our A.J. Calloway hooked up with the talk show titan in tropical paradise to celebrate the 10 year anniversary of her first solo shot on the cover of Sports Illustrated, which also marked the first time an African American woman appeared alone on the coveted magazine cover.

Little did Tyra know she just got her wish, as Sports Illustrated just announced Beyoncé will be their next bootylicious cover girl!

After recently revealing that she now weighs 160 pounds, about 20 pounds more than when she did her historic shoot, Tyra told “Extra” how she got back into the same bathing suit she rocked 10 years ago.

“I'm back in the bathing suit, but if you can get a close up of that, we had to add more fabric,” Tyra admitted. “You know what I looked like? I looked like a stripper! I was like, 'Where's my pole?' when I first put it on because I gained weight. It was not looking right, so we made it more modest.”

As for how Tyra feels about her body 10 years later, she told us, “I'm still self-conscious about my booty. So I'm like, 'Who is, is there anybody?' …just as long as there are no paparazzi lurking in the trees.”

Speaking of the paparazzi, and the infamously unflattering photos of her that were published last year, Tyra has a heartfelt message for the tabloids that called her fat.

“Please, you guys, just don't say that type of stuff about people. It sells magazine, but what it's doing to young girls… I think everybody needs to be responsible,” she pleaded.