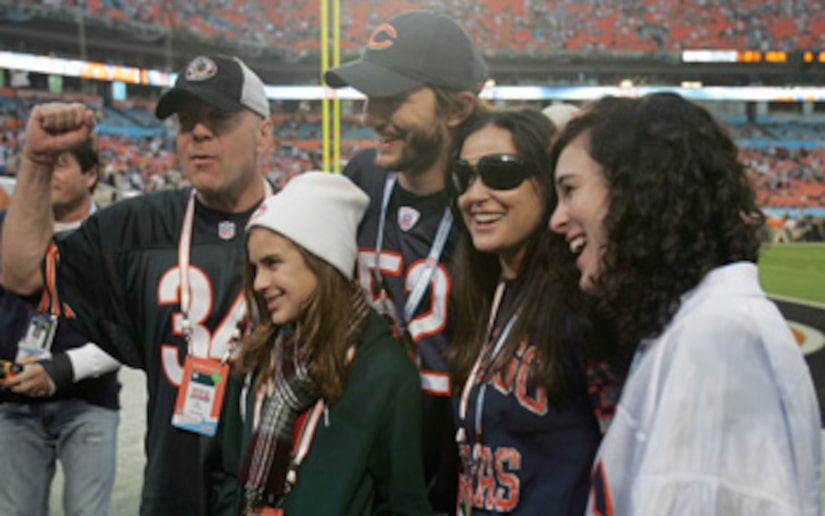 It was a super weekend for Hollywood's hottest couples, as the stars heated up Miami for Super Bowl XLI!

Tom Cruise and Katie Holmes stole the spotlight Saturday night, as the twosome danced the night away with son Connor in tow.

Marc Anthony and Jennifer Lopez undeniably heated things up at their block party concert with a steamy duet and fireworks display.

Happy clan Bruce Willis, Demi Moore and Ashton Kutcher showed up for the game decked out in Bears gear, while "Extra" spotted Justin Timberlake and John Travolta going back and forth between their luxury suites in between plays.

There was no end in sight for TomKat, who took separate breaks from their suit, but stopped long enough to pose for pictures for some very lucky fans.

As for the weekend's most surprising pairing, that award goes to David Letterman and Oprah Winfrey, who officially put a year-long rivalry to rest by showing up in a hilarious promo for Dave's "Late Show."

It was a high-octane weekend of fun for stars like Queen Latifah, Nick Lackey, Fergie, Josh Duhamel, Vivica A. Fox and "Extra's" Jon Kelley, who put the pedal to the metal at the Cadillac go-kart race.

While Jon didn't win, "Extra's" special correspondent Katie Lee Joel was with champion LeAnn Tweeden moments after she sprayed the crowd with champagne.

LeAnn was the official winner, but only after bumping into Nick Lachey.

"I did not mean to hit Nick Lachey like that; it just happened," she explained. "He was slow in the turn, and I bumped him out of the way."

"You know what, I didn't actually sign my waiver, between you and me, so I think... I'm going to go call my lawyer," Lachey joked.

At the ESPN: The Magazine Bash, LL Cool J jammed for the likes of Christian Slater and Alyssa Milano.

As for the fashion forward, "Extra's" Pat Smith was front and center at the 2007 EdgeTech Gridiron Glamour Show, as Chris Rock and wife Malaak Compton cheered on Niki Taylor and Jenny McCarthy as they strutted down the Saks 5th Avenue runway for charity, benefiting the Hollywood Foundation.

"I had to host a party here last night, and of course I was hired to be there till 5 a.m. and then come here at 8 a.m.," McCarthy dished, adding, "I have so much makeup on!"