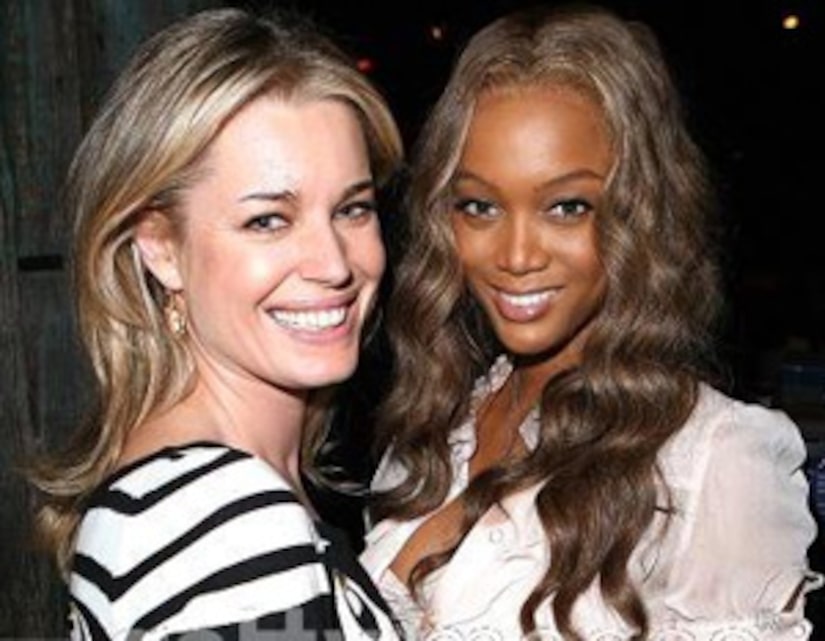 Rebecca Romijn is revealing all of her secrets exclusively to “Extra,” including her new role as the mysterious women behind the mask who finally reveals herself on “Ugly Betty.”

Our Tanika Ray met up with Rebecca on the set, where she couldn't wait to talk about her new character, Alexis, who is plotting with Vanessa Williams to take over Mode magazine.

But here's the catch: Alexis used to be Alex!

“I have two friends who are transgender, who are men who've became women,” Romijn revealed.
“One who's a very close friend, and she's as feminine as any biological woman you'll ever meet.”

Even Rebecca's main squeeze, Jerry O'Connell, is getting in on the fun, putting the moves on Alexis in an upcoming episode!

“She and Wilhelmina find themselves in a dirty old sports bar somewhere, and there's Jerry,” she described.

The beautiful blonde is no stranger to the spotlight, and the former supermodel also weighed in on Tyra Banks' battle with the paparazzi.

“If people are calling her fat, what does that say to all the little girls who adore Tyra?” she inquired.

“There was one they ran with me and Jerry walking down the street, where somebody doctored a giant hickey on his neck,” she said. “I would never ever give someone; hickeys are gross, I'm sorry!”

Rebecca also confessed that she still feels the pressure to stay runway thing, but she told “Extra” her darkest food secret.

“I'm a huge chocoholic,” she admitted. “I keep bags of mini candy bars in my freezer, and I swear, I probably go through five or six of those guys a night. I love them. I can't get enough, but I also work out everyday. And I eat really, really, really well.”