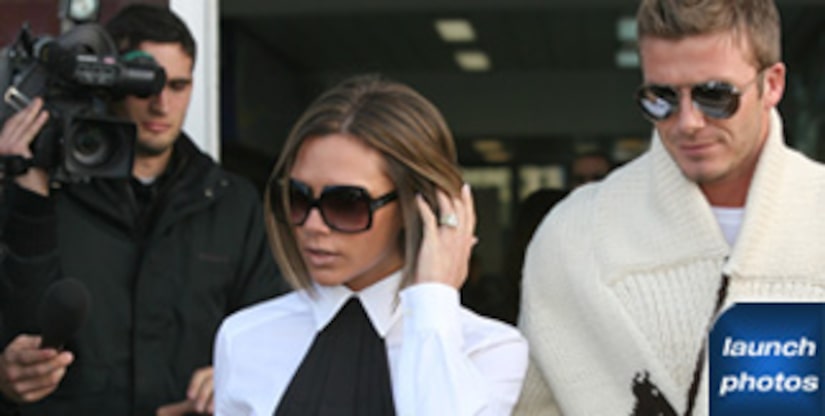 He's hot, he's ripped and, on Friday, he became mega-rich!

It's the biggest British invasion since the Beatles, as international soccer superstar David Beckham and his gorgeous wife, Victoria, announced they will pack their bags for Beverly Hills.

On Friday, the sex symbol uttered his first words about his bank-busting $250 million deal with the L.A. Galaxy soccer team.

"Of course it's a huge amount of money," David admitted.

When "Good Morning America's" Diane Sawyer asked David how he's going to spend it like Beckham, inquiring, "Is there anything that you haven't been able to buy that you're now going to be able to buy," he answered ever so cleverly.

"I'm sure there'll be many things, my wife controls that side," David said.

With his Brad Pitt looks, Becks is a paparazzi magnet.

L.A.'s famed Splash News Agency told "Extra" that the Beckhams will be the most photographed couple in Hollywood, and we're breaking news about David's big move and his phone call to his close pal, Tom Cruise.

"I was on the phone with him for an hour last night, then an hour the night before," Becks dished. "Obviously, I asked him for his advice as well because he's a very wise man, he's a very good friend of mine."

Tom Cruise reportedly introduced David to Victoria long ago, and the couple was at Tom and Katie's big Italian wedding; since then, David and Tom's leading ladies have been spotted together from L.A. to Paris.

To back up their longtime friendship, David and Victoria reportedly named the youngest of their three kids "Cruz," in honor of Tom.

There has even been talk that Cruise wants to do a movie about the soccer aficionado's life.

"I'm a soccer player, and that's all that interests me at the moment," David told our Jon Kelley.

Victoria has been spotted house hunting in Beverly Hills and Bel-Air, and "Extra" has learned their posh new home will be in the $20 million range.