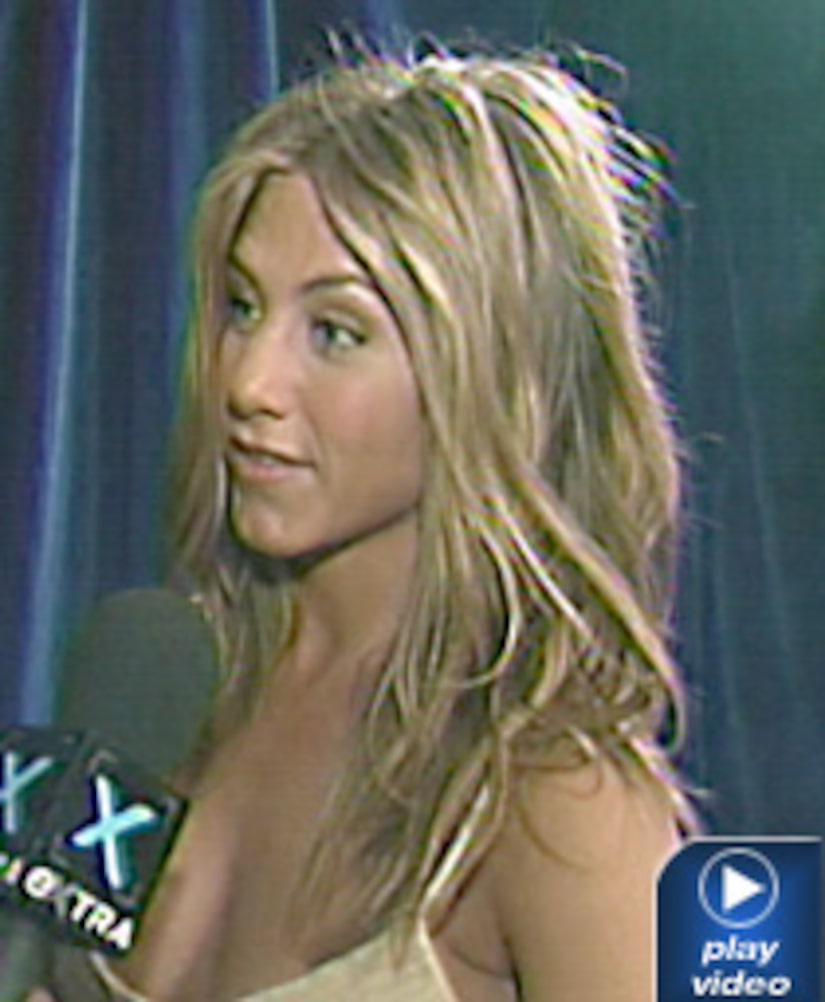 The people have spoken, and “Extra” was ready to celebrate with the stars as they came offstage.

This year, Jennifer Aniston took home the award for Female Star of the Year!

“It's '07, and it's heaven,” Jen told our Tanika Ray backstage at the 33rd Annual People's Choice Awards after her big win.

Despite Jen and co-star Vince Vaughn's real-life “Break-Up,” Jennifer thanked her ex who was seated on the other side of the room.

“He's so funny and talented,” she praised Vince.

“(Jen is) one of the funniest, most genuine people I know,” Vince said. “She's the best.”

Jen and Vince's appearance at the awards show was carefully orchestrated so the two would not cross paths backstage, where Jennifer beamed about her New Year's getaway with best friend, Courteney Cox.

“We had fun with the baby, it was just a ball,” she gushed.

“I would love to if I was invited, just to be able to work with my girl again,” she said. “We have talked about it, we've danced around it.”

Meanwhile, in the wake of her own breakup rumors, and Us Weekly's cover story that Justin has found romance with Scarlet Johansson, Cameron Diaz flew solo.

But the leading lady was flying high as the people named her Favorite Leading Lady.

So what does this award mean to the lovable actress?

“Are you kidding, it's beautiful,” Cam said of the honor.

Not only do the people love Cameron, they love her ex too!

While JT was a no-show at Wednesday night's awards show, he accepted his award for Best R&B Song via satellite.

“If it wasn't for the people I would never get an award,” she joked.

Eva was also happy to do a little “Extra” rumor control about her upcoming wedding and rumors that she's banning fiancé Tony Parker from having a wild bachelor party.

“No, it is not true, I don't know where this rumor started,” she said. “It's all over the internet!”

But will she let Tony have strippers?

From “Two and a Half Men” to “Heroes,” “Extra” celebrated with the casts of all the People's picks for Favorite TV Shows.

And from Best TV Drama “Grey's Anatomy,” Kate Walsh promised the best is yet to come.

“We are in the middle of shooting our massive Super Bowl episode, which all I can say is, if you thought last year was explosive, wait until you see this year,” she promised.

Robin Williams also kept us in stitches as he delivered a message to Ms. Britney Spears.

“Girl, you don't go out with Paris Hilton! She is not your friend,” he said. “I bought my kids a Paris Hilton doll, and it dragged the other dolls down to her level… it's insane.”

We're pretty sure that's why Robin was the people's pick for Favorite Funny Male Star!

Congratulations to all the winners of the 33rd Annual People's Choice Awards, and the best of luck for the upcoming awards season!