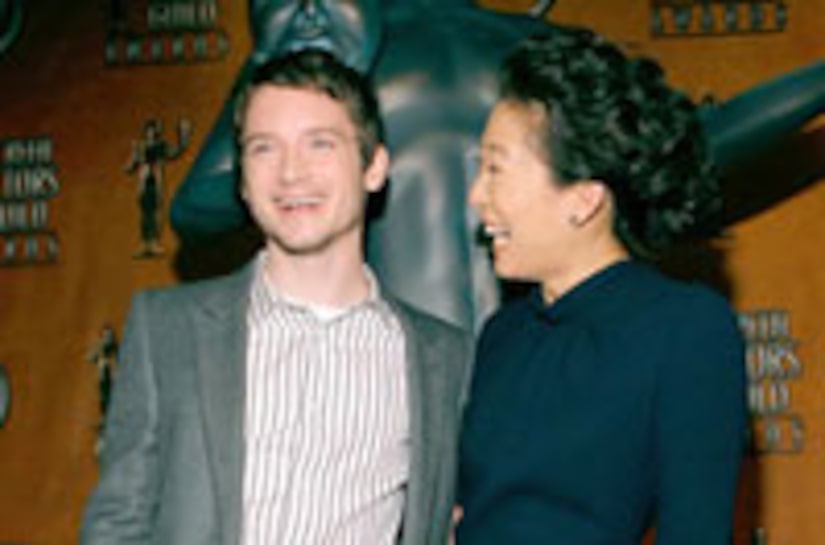 On Thursday morning, Elijah Wood and Sandra Oh broke the great news to all the stars, as they announced the nominees for the 13th Annual Screen Actors Guild Awards.

A frontrunner among the nominees was "Dreamgirls." The film was nominated for Best Cast, and Eddie Murphy and Jennifer Hudson both received individual nods for their monumental roles.

"I don't even know what to tell you, I'm over the top right now," Hudson admitted.

Leonardo DiCaprio got a Lead Actor nod for "Blood Diamond" and a Supporting nom for "The Departed," which was also nominated for Best Cast alongside "Little Miss Sunshine," "Bobby" and "Babel."

Brad Pitt, Jack Nicholson and Sharon Stone are also among this year's nominees, but Sandra Oh told "Extra" that there's one superstar nominee she's too shy to even meet: Meryl Streep.

"Can't even go there, like, what am I supposed to do? I won't even look at the woman," Sandra confessed.

"I can't tell you how happy I am," Oh admitted of her co-stars pat on the back.

The "Grey's Anatomy" cast will face off against "24" for Best Drama, where Kiefer Sutherland could nab his second Best Actor trophy.

Also, congrats to the "Desperate Housewives," up for Comedy Ensemble, and Felicity Huffman, who got a Lead Actress nod for her stand-out performance.

Catch all of the awards live in action on Jan. 28 on TNT and TBS.

And last but not least, "Extra" is breaking Golden Globes news. We've learned exclusively that Hugh Grant will present at the awards Jan. 15 on NBC.